In this article 7, we start from a System Definition model developed with SysML and we present an approach, which uses real-time architecture specialised language to refine this definition into an Electric / Electronics and Software Architecture. We use AADL (Architecture Analysis Description Language) as an example, but we could use languages with similar concepts and purposes such as AUTOSAR (used in automotive industry) or UML MARTE.

We present the allocation of timing budgets on SysML models, starting from operational scenarios, and through the concept of Functional Chains. We refine these timing requirements through the definition of physical components and a physical architecture formalised with AADL.

In the previous articles (part 1 to part 5), we have introduced a method based on the SysML notation to support the following systems engineering activities :

This article starts with the availability of a logical architecture for a case study called AIDA (that comes from the Saint Exupery Research Institute). It is illustrated below: 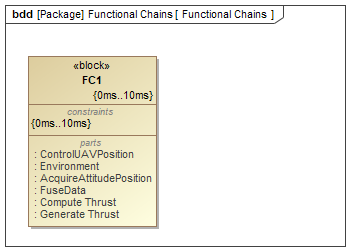 End to end timing requirement on a functional chain

As an example, the following IBD diagram focuses on the functional chain that controls the position of the UAV and the required thrust value. The end to end timing requirement applies to the whole functional chain, which means in our example that the final solution shall take less than (or equal to) 10 ms to perform the loop. Therefore, it is necessary to divide the timing budget and to allocate a time duration to each function in order to find a solution that can satisfy this requirement.

In practice, the proposed process consists for the System Engineer in defining timing requirements as budgets for all the elements of the overall chain. Then, Systems Designers will have to demonstrate how their selected design meets these execution budgets. This is where we suggest to use AADL language to refine timing properties induced by selected hardware components and software properties. The next paragraph quickly presents the AADL language and the following paragraph provides an application on our example.

AADL (Architecture Analysis and Design Language) is a language dedicated to the modeling and analysis of real-time, safety critical, embedded systems. It is a standard published by the Society of Automotive Engineers as reference AS5506C.

The AADL language relies on both graphical and textual syntax and it includes the following concepts and extensions: 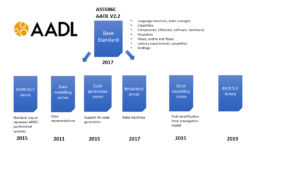 In this article, we focus on the following Base Standard concepts:

To illustrate the full approach, we use a simplified model of an Unmanned Aerial Vehicle (UAV) based on the AIDA case study developed at the St-Exupery Research Institute. We use the following languages and tools:

And Hardware architecture has been defined with inspiration from crazyflie aadl architectural model.

The AIDA Logical Architecture in SysML has been recalled at the beginning of this article. Here we put the focus on the UAV system and in particular the co-design of the electric/electronic and distributed software architecture.

The functional goal is to control the actual position of the UAV to fit the expected trajectory around the aircraft. Therefore, one must find the right control parameters so that the UAV can follow the expected trajectory within an expected maximum timing latency. Then, we want to verify the compliance of the selected hardware and software architecture to the timing requirements.

Recall of the AIDA Functional and Logical Architectures

The AIDA Functional Architecture is defined in SysML and presented below: 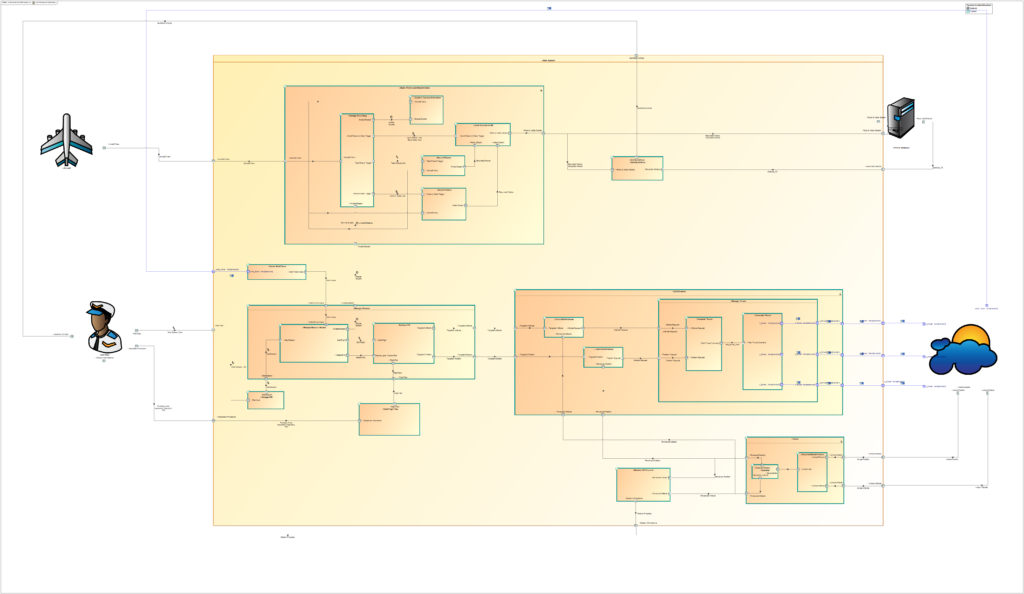 In this functional architecture, we detail the position and attitude control functions, as well as the compute thrust and generate thrust functions of the UAV.

The logical architecture is established with regards to emerging systems and sub-systems decomposition. In this example, we decompose the UAV into the following subsystems:

Then, we allocate the functions to the subsystems as follows:

Definition of Timing Requirements (end to end latency) in SysML

Next, we define the expected maximum latency of the measurement to thrust force control (performance of the control loop) in a specific functional chain defined in SysML, as presented below:

This chain is extended with the duration constraint property defined with a range of valyues between min and max values. In our example: 0ms .. 10ms.

From this step, we perform the design of this system using the AADL language to support software design by taking into account hardware constraints and performing timing verification.

The first step is to translate the functional/logical architectures and functional chains defined in the SysML language toward a logical architecture using the AADL language. This step results in an AADL System Implementation using Abstract Components and end to end flows as illustrated below:

Define Hardware / Software components that fit with the logical architecture

Now we can explore the different physical technical solutions able to refine this logical architecture and we determine the appropriate physical components (hardware and software) which satisfy all the requirements (functional and non-functional such as timing requirements or expected temperature range, safety level of selected devices, constraints due to selected solutions, …).

This exploration space is wide and shall be done carefully with regards to the compatibility of the physical interfaces. In the following example, we select a design solution to minimise the cost and timing execution of the Flight Control Management from Targeted Attitude and Position input up to the generation of the Thrust Force. The engineering goal is to move the UAV with an expected maximum timing budget of 10 ms.

With this design, we propose a mapping from Sub-Systems to Physical Components as follows:

Note : In the Logical Architecture, the Perception Sub-System shall eprform the following internal functions:

According to the expected performance and available/selected technologies, some sensors may provide hardware support for FuseData. In the proposed solution we perform the selection based on costs, so we decide to perform FuseData using dedicated software and we allocate the FuseData function to the Flight Controller instead of Sensors module.

Then, we can design the software architecture while taking into account hardware constraints, and study the technical solutions to implement the logical components (selection of appropriate devices and processors, decompose functions into several processes, allocate processes to one or more processors, define interaction between the software and hardware elements, …). At this stage, hardware and software engineers shall analyse the suitability of the architecture regarding functional and non-functional requirements (such as timing requirements).

For this article, we propose a simplified electronic architecture using the following physical components :

With those choices, we suggest the following AIDA HW Architecture: 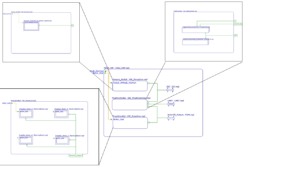 For software design, we suggest decomposing the software in 2 processes (connectivity and flight management). This is mainly due to the following elements:

That is the reason why, in this proposal, we have performed the following decomposition:

The proposed AIDA SW Architecture is presented below: 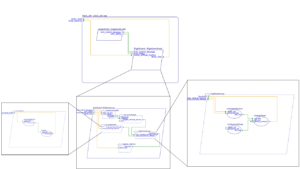 Finally, we can perform the binding in a 3 steps process:

3. Verify the consistency of the design by checking that all the logical components are bound to the Processes and the hardware components.

Perform Timing Analysis thanks to AADL

Now, it is possible to use integrated AADL analysis (static analysis, scheduling analysis) thanks to some AADL compatible simulation tools such as AADL Inspector.

We can analyze the compliance to the expected end to end timing requirements :

And then, perform scheduling analysis with appropriate simulator to check the suitability of the technical solution parameters. Indeed, defining appropriate scheduling properties may be difficult to achieve because hardware elements have physical limits (sensors sampling time, …) and software timing properties (priorities, worst case execution time, data transmission delays, periods …) are not obvious to determine. Moreover, you may encounter feasibility issues to satisfy the allocated timing budget if the System Engineer does not have these constraints in mind.

In this example of scheduling simulation, we can observe that some deadlines are missed , which was not obvious to determine in the initial allocation phase.

The Systems Architect has to analyse the impacts of change requests from the proposed hardware/software solutions.

In this example, the systems engineer has performed an initial allocation of functions to logical components based on his initial knowledge. Then, the Hardware / Software Design team has performed analysis of existing components, devices and software components which exist as libraries. In our case, the analysis has shown that there is a mismatch between initially expected interfaces and provided interfaces by the selected sensor device (which implements Perception Subsystem). So, Hardware/Software design team performs a proposal to change initial allocation of FuseData function from Perception Subsystem to Flight Control Management subsystem.

So we update the Logical Architecture in SysML accordingly, as shown in the following figure:

In addition, some timing budgets between subsystems can be adjusted regarding the feasibility of the proposed solutions when possible. Some changes in timing requirements or in interface definitions may have consequences on other engineering specialities or on other components. So, this impact analysis is not always straight forward (rather iterative).

In this article we have proposed a coupling methodology between SysML (a Systems Engineering language) and a hardware/software design language (AADL). Note that this method can easily be tuned for other languages with similar concepts (real-time, scheduling, …) such as AUTOSAR or UML MARTE.

The proposed method includes a definition of system requirements using SysML (including end to end timing requirements with the Functional Chains concept) and an initialisation a specialised model for hardware/software architectures (and associated network topologies). This translation allows to study the definition of the detailed design in the AADL language in order to benefit from suitable concepts and various timing analysis capabilities available in AADL toolboxes.

Finally, when the virtual product can be verified against its requirements, this activity can lead to a change management loop with some updates to perform in the system definition (system requirements) with potential impacts on the SysML model.

To complete this present work, we will later refine the analysis of the mapping between Data Types defined at System Level and Resulting Data Types from the selected design (in particular, study the influence of selected implementation types like how to implement a Real value from system to a fixed point 32 bits data and verify the suitability of the selected implementation type regarding accuracy requirements).

In other further works, we plan to investigate how to create an initial physical architecture in SysML model by defining components libraries (ECUs, sensors, mechanical components, …), network topologies and how to convert this in AADL “world”. Then, we will propose adequate automations to perform the “bridge” from SysML to AADL based on mappings (still to refine).

We also intend to explore in more detail the other AADL language capabilities and associated annexes such as the behavioural annex (how to initiate AADL modes management from SysML behavioural description) or Error Modelling Annex (how to coordinate Systems Safety Analyses, Systems Engineering model and Safety Analyses for hardware/software design in AADL).

We are warmly grateful for the support of the Ellidiss company and in particular Pierre Dissaux concerning the AADL modeling and simulation activity in the context of this article.

A special thanks to Jerôme Hugues for his advice and interesting discussions about these topics.