This article is part of a monthly series entitled « Advanced MBSE with SysML and other languages« .

In the first set of articles, this series explains how to use a modeling approach based on the SysML notation to progressively analyze, structure, refine and derive stakeholder needs and requirements into system architecture and lower-level requirements, down to configuration items containing software and hardware parts.

In the second set of articles, this series will focus on the links to other modeling languages used to detail the design and/or perform detailed analysis and simulations to evaluate, verify or validate the virtual representation of the system.

In this article, we go a step further by extracting the coupling metric between functions from the Functional Architecture (using an N² diagram technique) and using an optimization algorithm to minimize the coupling between logical components.

Minimizing the coupling between components, a good systems engineering practice!

Among Systems Engineering best practices, as stated in many standards, it is key to minimize the coupling between the sub-systems in order to master the product complexity. For instance, in the IEC 61508:2000 we find:

« The interfaces between subsystems are kept as simple
as possible and the cross-section (i.e. shared data, exchange of information) is minimised.« .

Are there any techniques or methods to support systems architects in minimizing the coupling between components?

Yes, to achieve such minimization, a well-known method consists of using Coupling Matrices (also called N 2 diagrams) and then reorganize them to identify architectures with minimal coupling.

Let us first explain how an N² diagram is defined, and let us illustrate that explanation with a case study. Secondly we will focus on the computation of the N² diagram to identify coupling optimization.

Introduction to the N² diagram method

Here below is an example of an N² diagram for a project with 9 functions that have dependencies.

In this matrix, the « 1 » represents an existing interface between the function of the concerned row and the function of the concerned column. The « 0 » indicates that there is no relation between those functions. In this example the matrix is symmetric, indicating that all the links are bi-directional. This is not the standard rules of the N² chart, which are better explained by the following figure. 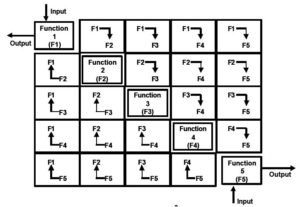 Illustration of how to read an N² diagram

The use of a coupling matrix is mentioned by the INCOSE SE handbook as a useful practice :

Coupling matrices (also called N 2 diagrams) are a basic method to define the aggregates and the order of integration (Grady, 1994). They are used during architecture definition, with the goal of keeping the interfaces as simple as possible… Simplicity of interfaces can be a distinguishing characteristic and a selection criterion between alternate architectural candidates. The coupling matrices are also useful for optimizing the aggregate definition and the verification of interfaces.

From this matrix we can compute a coupling value regarding the interfaces defined between the Logical Components (deduced from the interfaces between functions allocated to these components). The coupling value represent an evaluation of the coupling complexity between logical components based on the following formula derivated from software coupling metrics in Dhama, « Quantitative models of cohesion and coupling in software », Journal of Systems and Software vol; 29, Apr, 1995

where the parameters are defined as follows:

Now, let us see an illustration on a case study.

Our sample case is based on a case study elaborated within IRT St-Exupery called AIDA (Aircraft Inspection by Drone Assistant). This example was initially developed in a Capella environment and is available at https://sahara.irt-saintexupery.com/AIDA/AIDAArchitecture. For this article, we have translated the sample case to the SysML language.

In the previous article (part 4), we used this sample case to show how we can initialize the logical architecture from the functional architecture with the use of an allocation matrix between functions and logical components. In this article, we use it again, but this time we explain how to use optimization techniques to determine automatically the « best fit » to minimize the coupling. In other words, we want to define one or several possible allocations (illustrated by allocation matrices) between functions and logical components that minimize the coupling between the components.

Let us see this in practice.

N² diagram from the Functional Architecture

In the previous article (part 4) we showed a possible functional architecture elaborated for this sample case. We recall it in the figure below:

For this functional architecture, we can extract 2 N 2 diagrams for the leaf functions by analyzing their dependencies:

The results are displayed in the 2 figures below:

Now we want to define a logical architecture that minimizes the number of interfaces between its subsystems.

Optimization of allocation between functions and logical components

From a functional N² diagram to a logical architecture…

To perform optimization between components, we analyze the functions to functions coupling matrices introduced previously and we use them as input for a genetic algorithm presented later in this article. This algorithm will progressively iterate over different possible logical architectures and will calculate the coupling between components. In the end, it will select the architectures that minimizes the coupling metric.

Let us look at a possible logical architecture. How do we define it? We simply define the components (or modules) as groups (or partitions) of functions.

As an example, in the figure below, the orange color part of the figure illustrates an allocation (or partition) strategy of the 9 functions into 3 modules: M1, M2, and M3. In this figure, we are not interested in the internal structure of each module, which is why we do not represent the functional interfaces between functions of the same module. However, we want to see the functional interfaces between functions allocated to different modules because it will give us the logical interfaces. If we focus on the M3 module, we see in green the M3 inputs, and in blue the M3 outputs.

Note: we recommend reading the previous article for more details on the relationships between the functional architecture and the logical architecture.

From this matrix with modules, we can now compute a coupling metric regarding the interfaces of the modules.

Using a Genetic Algorithm to optimize the allocation of functions 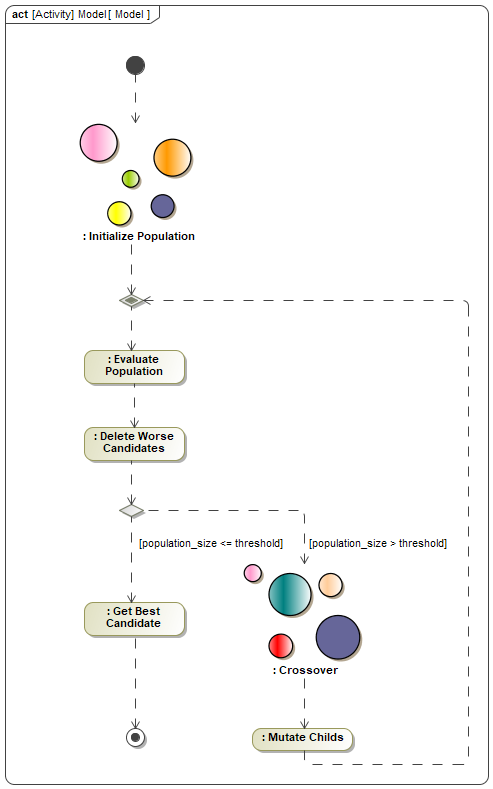 The first step is to create randomly a set of initial subjects (1). This set is called the initial population. The initial population is composed of subjects each representing a possible set of functions allocations. Then, the algorithm evaluates each subject using a fitness function (2). This function makes it possible to give a value, or a rank, to a subject, to estimate its proximity with the “optimal” solution. In our case the fitness function is the coupling equation C. The candidates that are too far from the desired solution are deleted (3).

Here begins the core biomimicry part of the genetic algorithm: the remaining subjects cross over, i.e. they exchange their genes to produce new subjects (4). Finally, the newly created childs are subject to mutation (5): part of their characteristics randomly change. Cross over and mutation are usefull to stay away from local optimum by spreading new subjects through the solution space.

Genetic algorithms are configurable using the following set of parameters:

What about constraints on allocations?

In practice, systems engineers already have good ideas of some allocations between functions and components or have constraints that exist on fixed allocations (for different reasons including security, performance…). So the genetic algorithm shall consider these first predefined allocations.

We have defined our genetic algorithm to be able to take as input a predefined partial allocation matrix with existing constraints. These constraints are considered by the algorithm that will then define possible logical architectures respecting the given constraints.

Selection of the « best » logical architecture that minimizes coupling

The genetic algorithm presented previously gives us one or several possible logical architectures that minimize the coupling between components while conforming to the functional architecture and eventual allocation constraints. We can use the results to generate or complete the allocation matrix between our functions and the components as presented below. 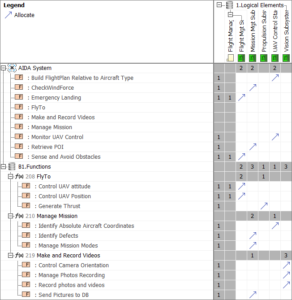 Thanks to the completion of this allocation matrix, we can deduce a logical architecture, as explained in the previous article (part 4) that shows the different logical subsystems with their allocated functions and keeps the functional flows coming from the functional architecture.

Can we automate some of the steps presented above?

At Samares Engineering, we have investigated automation of the different following steps :

We are warmly gratefull to Yash Khetan and Minghao Wang for their contribution. It was great to work with both of you. See you!

Previous articles in the series